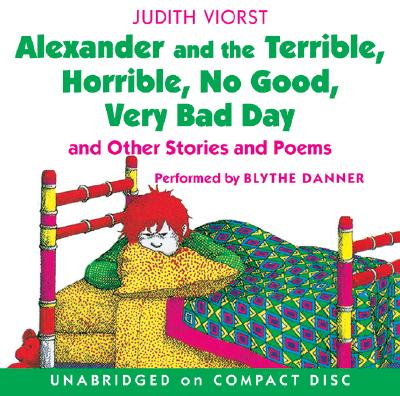 Poor Alexander! He woke up with gum in his hair; his mom forgot to put dessert in his lunch bag; there were lima beans for dinner, and kissing on TV -- even the cat refuses to sleep in his bed. Some days are just like that.

Alexander's awful day is the perfect lead-off for this collection of funny, touching stories about the ups and downs of childhood -- from imaginary monsters to saying goodbye to a family pet. Judith Viorst's insightful and humorous stories are the perfect antidote to any child's "terrible, horrible, no good, very bad day."

Blythe Danner, a Tony® winner, has starred in numerous Broadway productions, and in such films as Meet the Parents, The Great Santini, and The Prince of Tides; she played Zelda Fitzgerald in the telefilm, F. Scott Fitzgerald and "The Last of the Belles."