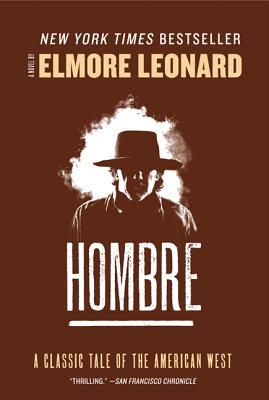 By Elmore Leonard
$14.99
Available from Our Distributor (5+ days shipping)

“Although known for his mysteries, Elmore Leonard has penned some of the best western fiction ever.”
—USA Today

“A classic….Leonard’s writing style is as effortless and enjoyable as watching a good movie.”
—Portland Oregonian

Grand Master Elmore Leonard is justifiably acknowledged as “the best writer of crime fiction alive” (Newsweek)—and, in fact, one of the very best ever, alongside other all-time greats like John D. MacDonald, Dashiell Hammett, James M. Cain, and Robert Parker. But he has also many acclaimed masterworks of American western fiction to his credit—including Hombre, the basis for the classic Hollywood motion picture starring Paul Newman. Set in Arizona mining country, Hombre is the tale of a white man raised by Indians, who must come to the aid of people who hate him when their stagecoach is attacked by outlaws. As thrilling as his contemporary novels of crime, double-cross, and murder in Detroit and Miami, Hombre is Elmore Leonard at his riveting best—no less than one would expect from the creator of U.S. Marshal Raylan Givens (Justified).

Elmore Leonard wrote more than forty books during his long career, including the bestsellers Raylan, Tishomingo Blues, Be Cool, Get Shorty, and Rum Punch, as well as the acclaimed collection When the Women Come Out to Dance, which was a New York Times Notable Book. Many of his books have been made into movies, including Get Shorty and Out of Sight. The short story "Fire in the Hole," and three books, including Raylan, were the basis for the FX hit show Justified. Leonard received the Lifetime Achievement Award from PEN USA and the Grand Master Award from the Mystery Writers of America. He died in 2013.

This feature require that you enable JavaScript in your browser.
END_OF_DOCUMENT_TOKEN_TO_BE_REPLACED