The Inevitable Party: Why Attempts to Kill the Party System Fail and How They Weaken Democracy (Paperback) 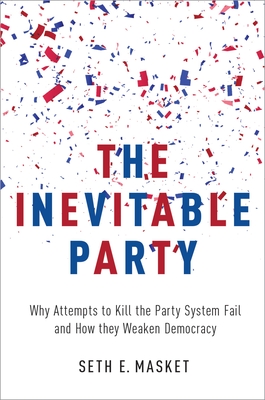 By Seth Masket
$33.95
Available from Our Distributor (5+ days shipping)

Seth Masket's The Inevitable Party is a study of anti-party reforms and why they fail. Numerous reform movements over the past century have designated parties as the enemy of democracy, and they have found a willing ally in the American people in their efforts to rein in and occasionally root out parties. Masket investigates several of these anti-party reform efforts - from open primaries to campaign finance restrictions to nonpartisan legislatures - using legislative roll call votes, campaign donations patterns, and extensive interviews with local political elites. These cases each demonstrate parties adapting to, and sometimes thriving amidst, reforms designed to weaken or destroy them. The reason for these reforms' failures, the book argues, is that they proceed from an incorrect conception of just what a party is. Parties are not rigid structures that can be wished or legislated away; they are networks of creative and adaptive policy demanders who use their influence to determine just what sorts of people get nominated for office. Even while these reforms tend to fail, however, they impose considerable costs on society, usually reducing transparency and accountability in politics and government.

Seth Masket is associate professor and chair of the Department of Political Science at the University of Denver. His research and teaching focus on party nominations, state legislatures, campaigns and elections, and social networks. He is the author of No Middle Ground: How Informal Party Organizations Control Nominations and Polarize Legislatures. He is a founding contributor to the Vox.com blog "Mischiefs of Faction" and writes a weekly column for Pacific Standard.

This feature require that you enable JavaScript in your browser.
END_OF_DOCUMENT_TOKEN_TO_BE_REPLACED