New Women of the New South: The Leaders of the Woman Suffrage Movement in the Southern States (Paperback) 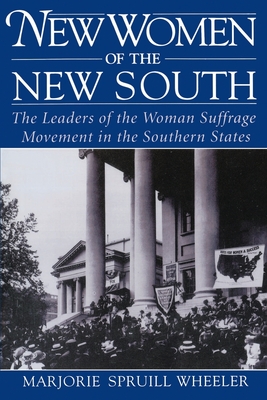 By Marjorie Spruill Wheeler
Email or call for price.
Get It In 1-5 Days

There is currently a great deal of interest in the Southern suffrage movement, but until now historians have had no comprehensive history of the woman suffrage movement in the South, the region where suffragists had the hardest fight and the least success. This important new book focuses on eleven of the movement's most prominent leaders at the regional and national levels, exploring the range of opinions within this group, with particular emphasis on race and states' rights. Wheeler insists that the suffragists were motivated primarily by the desire to secure public affirmation of female equality and to protect the interests of women, children, and the poor in the tradition of noblesse oblige in a New South they perceived as misgoverned by crass and materialistic men. A vigorous suffrage movement began in the South in the 1890s, however, because suffragists believed offering woman suffrage as a way of countering black voting strength gave them an "expediency" argument that would succeed--even make the South lead the nation in the adoption of woman suffrage. When this strategy failed, the movement flagged, until the Progressive Movement provided a new rationale for female enfranchisement. Wheeler also emphasizes the relationship between the Northern and Southern leaders, which was one of mutual influence. This pioneering study of the Southern suffrage movement will be essential to students of the history of woman suffrage, American women, the South, the Progressive Era, and American reform movements.