The Gun Debate (What Everyone Needs to Know) (Paperback) 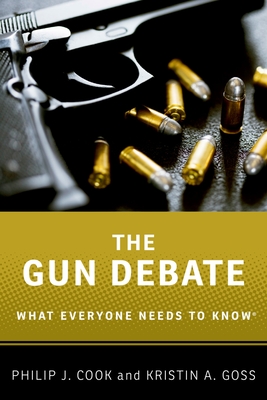 By Philip J. Cook, Kristin a. Goss
$16.95
Available from Our Distributor (5+ days shipping)

No topic is more polarizing than guns and gun control. From a gun culture that took root early in American history to the mass shootings that repeatedly bring the public discussion of gun control to a fever pitch, the topic has preoccupied citizens, public officials, and special interest groups for decades. The Gun Debate: What Everyone Needs to Know� delves into the issues that Americans debate when they talk about guns. With a balanced and broad-ranging approach, noted economist Philip J. Cook and political scientist Kristin A. Goss thoroughly cover the latest research, data, and developments on gun ownership, gun violence, the firearms industry, and the regulation of firearms. The authors also tackle sensitive issues such as the effectiveness of gun control, the connection between mental illness and violent crime, the question of whether more guns make us safer, and ways that video games and the media might contribute to gun violence. No discussion of guns in the U.S. would be complete without consideration of the history, culture, and politics that drive the passion behind the debate. Cook and Goss deftly explore the origins of the American gun culture and the makeup of both the gun rights and gun control movements. Written in question-and-answer format, the book will help readers make sense of the ideologically driven statistics and slogans that characterize our national conversation on firearms. This book is a must-read for anyone interested in getting a clear view of the issues surrounding guns and gun policy in America. What Everyone Needs to Know� is a registered trademark of Oxford University Press.

This feature require that you enable JavaScript in your browser.
END_OF_DOCUMENT_TOKEN_TO_BE_REPLACED