How the Old World Ended: The Anglo-Dutch-American Revolution 1500-1800 (Hardcover) 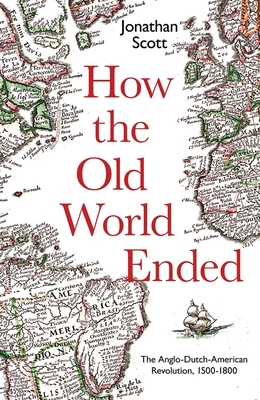 A magisterial account of how the cultural and maritime relationships between the British, Dutch and American territories changed the existing world order – and made the Industrial Revolution possible

Between 1500 and 1800, the North Sea region overtook the Mediterranean as the most dynamic part of the world. At its core the Anglo-Dutch relationship intertwined close alliance and fierce antagonism to intense creative effect. But a precondition for the Industrial Revolution was also the establishment in British North America of a unique type of colony – for the settlement of people and culture, rather than the extraction of things.

England’s republican revolution of 1649–53 was a spectacular attempt to change social, political and moral life in the direction pioneered by the Dutch. In this wide-angled and arresting book Jonathan Scott argues that it was also a turning point in world history.

In the revolution’s wake, competition with the Dutch transformed the military-fiscal and naval resources of the state. One result was a navally protected Anglo-American trading monopoly. Within this context, more than a century later, the Industrial Revolution would be triggered by the alchemical power of American shopping

Jonathan Scott is Professor of History at the University of Auckland. His previous publications include England’s Troubles and When the Waves Ruled Britannia.

“Everything about this book is bravura: its conceptual originality, scope and ambition, its rich and close reading of texts and its brilliant writing. It exudes the joy of both discovery and recovery and it exudes the power of startling connections.“—John Morrill FBA, Emeritus Professor of British and Irish History, University of Cambridge, and Fellow of Selwyn College

"In Jonathan Scott we have a master of political and religious history, and of the history of political thought, who transcends geographical space and time periods so that he can write a genuine 'histoire totale' of a critical phase in world history. As he did in England's Troubles, Scott in this stimulating book makes the very timely case for why, in seeking the roots of England's remarkable early modern and subsequent political and economic developments, an Anglo-Dutch comparative framework is fruitful - far more so than one which stresses exceptionalism or separateness from the rest of Europe."—Richard M. Smith, Emeritus Professor of Historical Geography and Demography and Fellow of Downing College

"Incredibly ambitious, wide-ranging and fluent. How The Old World Ended is a good and stimulating (and sometimes annoying) read, and it nails its colours to the mast in relation to the contemporary significance of the developments it narrates."—Michael J Braddick, Professor of History, University of Sheffield

“A superbly engrossing history of perhaps the most momentous period since the Stone Age. By turns sweeping and intimate, it demonstrates how the political events of that age – the English, American, and French Revolutions – were never separate from the social, economic, scientific, religious, and natural experiences of those living through them. Anyone interested in how we got into our present state will find things to provoke, excite, and infuriate on every page. "—Adrian Johns, Professor of History, University of Chicago

This feature require that you enable JavaScript in your browser.
END_OF_DOCUMENT_TOKEN_TO_BE_REPLACED