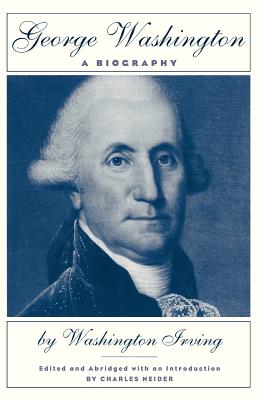 By Washington Irving
$31.99
Available from Our Distributor (5+ days shipping)

Washington Irving's Life of George Washington (published in five volumes in 1856-59) was the product of his last years and remains his most personal work. Christened with the name of the great general, Irving was blessed by Washington while still a boy of seven, and later came to know many of the prominent figures of the Revolution. In these pages he describes them using firsthand source material and observation. The result is a book which is fascinating not only for its subject (the American Revolution), but also for how it reveals in illuminating detail the personality and humanity of a now remote, towering icon. Here is an intimate portrait of Washington the man, from Virginia youth to colonial commander to commander-in-chief of the patriot army to first president and great guiding force of the American federation. But one cannot read Irving's Life without marveling at the supreme art behind it, for his biography is foremost a work of literature. Charles Neider's abridgment and editing of Irving's long out-of-print classic has created a literary work comparable in importance and elegance to the original. George Washington, A Biography, Neider's title for his edition of Irving's Life, makes the work accessible to modern audiences. The extensive introduction provides a detailed analysis of Irving's life and times, and the difficulties he faced as he worked against his own failing health to finish what he felt was his masterpiece. This new edition of the superb biography of America's first citizen by America's first literary artist remains as fresh and unique today as when it was penned.

Charles Neider is a noted critic, editor, author, and one of America's leading Mark Twain scholars. His many books as editor include The Complete Humorous Sketches and Tales of Mark Twain, The Great West: A Treasury of Firsthand Accounts, The Complete Tales of Washington Irving, and The Autobiography of Mark Twain.

This feature require that you enable JavaScript in your browser.
END_OF_DOCUMENT_TOKEN_TO_BE_REPLACED