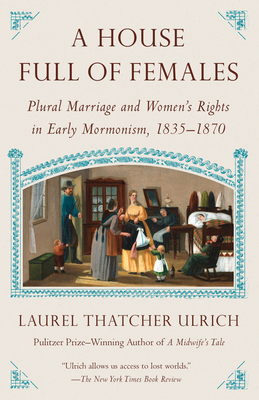 From the author of A Midwife's Tale, winner of the Pulitzer Prize and the Bancroft Prize for History, and The Age of Homespun--a revelatory, nuanced, and deeply intimate look at the world of early Mormon women whose seemingly ordinary lives belied an astonishingly revolutionary spirit, drive, and determination.

A stunning and sure-to-be controversial book that pieces together, through more than two dozen nineteenth-century diaries, letters, albums, minute-books, and quilts left by first-generation Latter-day Saints, or Mormons, the never-before-told story of the earliest days of the women of Mormon "plural marriage," whose right to vote in the state of Utah was given to them by a Mormon-dominated legislature as an outgrowth of polygamy in 1870, fifty years ahead of the vote nationally ratified by Congress, and who became political actors in spite of, or because of, their marital arrangements. Laurel Thatcher Ulrich, writing of this small group of Mormon women who've previously been seen as mere names and dates, has brilliantly reconstructed these textured, complex lives to give us a fulsome portrait of who these women were and of their "sex radicalism"--the idea that a woman should choose when and with whom to bear children.

LAUREL THATCHER ULRICH was born in Sugar City, Idaho. She holds degrees from the University of New Hampshire, University of Utah, and Simmons College. She is 300th Anniversary University Professor at Harvard University and past president of the American Historical Association. As a MacArthur Fellow, Ulrich worked on the PBS documentary based on A Midwife's Tale. Her work is also featured on an award-winning website called dohistory.org. She is immediate past president of the Mormon History Association. She lives in Cambridge, Massachusetts.

“As crucial as it is fascinating . . . It’s no secret that history is full of people, often women, whose usually unpaid labor allowed famous men to make their marks on the world. . . . Historians like Ulrich make sure they’re not forgotten.” —Time

“[An] empathetic account of the women of early Mormonism. . . . Ulrich describes the daily lives of these women in attentive detail, their sorrows . . . their stubborn strength, and their willingness to defy social norms. To the astonishment of the outside world, the same women who vigorously defended multiple marriages also fought for—and won—female suffrage.” —The New Yorker