Grace After Midnight: A Memoir (Paperback) 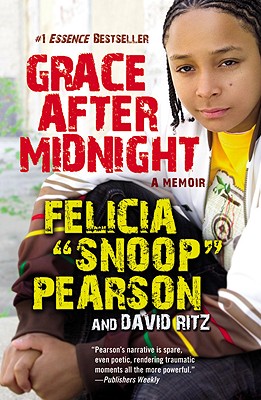 Felicia Pearson, who starred of the acclaimed television series The Wire, reveals her incredible, hard-knock life story, one that dramatically parallels her television character.

While Felicia is a brilliant actor who played a truly chilling role, what's most remarkable about "Snoop" is what she has overcome in her life. Snoop was born a three-pound cross-eyed crack baby in East Baltimore. Those streets are among the toughest in the world, but Snoop was tougher. The runt of the ghetto showed an early aptitude for drug slinging and violence and thrived as a baby gangsta until she landed in Jessup state penitentiary after killing a woman in self-defense. There she rebelled violently against the system, and it was only through the cosmic intervention of her mentor, Uncle Loney, that she turned her life around. Eventually, Snoop was discovered in a nightclub by one of The Wire's cast members and quickly recruited to be one of television's most frightening and intriguing villains.

While the story of coming up from the hood has been told by Antwone Fisher and Chris Gardner, among others, Snoop's tale goes far deeper into The Life than any previous books. And like Mary Karr's story, Snoop's is a woman's story from a fresh point of view. She defied traditional conventions of gender and sexual preference on the hardest streets in America and in front of millions of viewers on TV.

Felicia Pearson still lives in Baltimore, Maryland and is studying at the Baltimore School of the Arts. Felicia is now focusing on expanding her career to movies.

David Ritz is co-author of Tavis Smiley's bestseller What I Know For Sure. He has also collaborated with Etta James, Aretha Franklin, Marvin Gaye, Ray Charles, Laila Ali and B.B. King on their life stories. He has won a Grammy, a Deems Taylor ASCAP award, four Rolling Stone/Ralph J. Gleason book awards and is the co-composer of "Sexual Healing." He lives in Los Angeles.

"Raw and thought provoking...told with a bitter sweet elegance...the story of a child who buried her pain and then filled her life with violent behavior. But Snoop's journey is now a rainbow shining in the light of hope and wellness...and is a gift to us all."
—Terrie M. Williams, author of Black Pain: It Just Looks Like We're Not Hurting, -

"Felicia's story is a reminder to me that through the depths of the worst unforeseen circumstances, that life can sometimes bring, the 2 things that we must never lose sight of, GOD's Grace, and Hope. Felicia is a perfect example of one who learned this the hard way and will now, never lose her way again."
—Jamie Hector, NBC's Heroes, -

"Pearson's memoir is even more horrifying than the cold-blooded killer she portrays on The Wire."
—Kirkus Reviews, -

"A gripping story about overcoming obstacles in the face of great adversity and finding hope in the most unlikely place-television."
—Ebony, -

"A remarkable book about a remarkable lady...will encourage anyone who aspires to be bigger and better than what they are...an awesome book to give to a young person as a Christmas gift."
—Allhiphop.com, -

"This is no rage-to-riches story. In fact, it reads more like a miracle."
—Essence, -

"Read her intriguing life story...it's a short, punchy ride of a book."
—Giant, -

"Apowerful story of someone trying to find her way in a dark world, realizing she can still choose her life's direction even in tremendously difficult circumstances. Pearson's narrative is spare, even poetic, rendering traumatic moments all the more powerful."
—Publishers Weekly, -

This feature require that you enable JavaScript in your browser.
END_OF_DOCUMENT_TOKEN_TO_BE_REPLACED