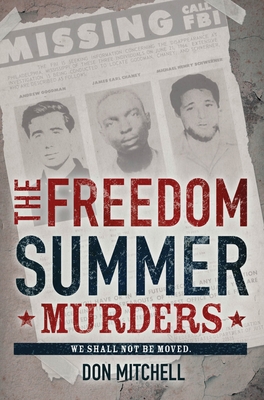 By Don Mitchell
Email or call for price.
Not Available

A gripping true story of murder and the fight for civil rights and social justice in 1960s Mississppi.
On June 21, 1964, three young men were killed by the Ku Klux Klan for trying to help black Americans vote as part of the 1964 Fredom Summer registration effort in Mississippi. The disappearance and brutal murders of James Chaney, Andrew Goodman, and Michael Schwerner caused a national uproar and was one of the most significant events of the civil rights movement.

The Freedom Summer Murders tells the tragic story of these brave men, the crime that resulted in their untimely deaths, and the relentless forty-one-year pursuit of a conviction. It is the story of idealistic and courageous young people who wanted to change their county for the better. It is the story of black and white. And ultimately, it is the story of our nation's endless struggle to close the gap between what is and what should be.

Don Mitchell is a critically acclaimed author of nonfiction for young people, including The Freedom Summer Murders, which received multiple starred reviews and was a Kirkus Prize finalist for Young Readers’ Literature, an NAACP Image Award nominee for Outstanding Literary Work for Teens, and a Kirkus Reviews Best Teen Book of the Year; Liftoff: A Photobiography of John Glenn; and Driven: A Photobiography of Henry Ford. He has served on the staff of the US Senate Select Committee on Intelligence, as well as on the staff of the National Security Council.

Awards and Praise for The Freedom Summer Murders

* "A must-read in any young adult study of the civil rights era." --Publishers Weekly (starred review)

"[An] absorbing book.... It will grab you fom its opening paragraphs an won't let go until justice is serve." --The Horn Book Magazine

"This is quite simply the best book on this subject for young people." -- David Goodman, President, The Andrew Goodman Foundation

*"A must-read in any young adult study of the civil rights era." -Publishers Weekly, starred review

- Kirkus Best Book of the Year

This feature require that you enable JavaScript in your browser.
END_OF_DOCUMENT_TOKEN_TO_BE_REPLACED