Bandido: The Life and Times of Tiburcio Vasquez (Paperback) 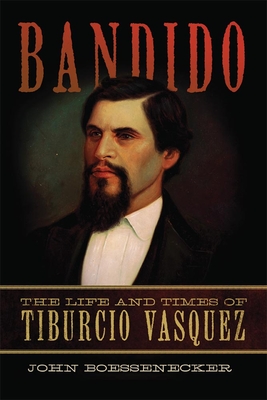 By John Boessenecker
Email or call for price.
Available from Our Distributor (5+ days shipping)

Tiburcio Vasquez is, next to Joaquin Murrieta, America's most infamous Hispanic bandit. After he was hanged as a murderer in 1875, the Chicago Tribune called him "the most noted desperado of modern times." Yet questions about him still linger. Why did he become a bandido? Why did so many Hispanics protect him and his band? Was he a common thief and heartless killer who got what he deserved, or was he a Mexican American Robin Hood who suffered at the hands of a racist government? In this engrossing biography, John Boessenecker provides definitive answers.

Bandido pulls back the curtain on a life story shrouded in myth -- a myth created by Vasquez himself and abetted by writers who saw a tale ripe for embellishment. Boessenecker traces his subject's life from his childhood in the seaside adobe village of Monterey, to his years as a young outlaw engaged in horse rustling and robbery. Two terms in San Quentin failed to tame Vasquez, and he instigated four bloody prison breaks that left twenty convicts dead. After his final release from prison, he led bandit raids throughout Central and Southern California. His dalliances with women were legion, and the last one led to his capture in the Hollywood Hills and his death on the gallows at the age of thirty-nine.

From dusty court records, forgotten memoirs, and moldering newspaper archives, Boessenecker draws a story of violence, banditry, and retribution on the early California frontier that is as accurate as it is colorful. Enhanced by numerous photographs -- many published here for the first time -- Bandido also addresses important issues of racism and social justice that remain relevant to this day.

This feature require that you enable JavaScript in your browser.
END_OF_DOCUMENT_TOKEN_TO_BE_REPLACED