Matchstick Men: A Novel About Grifters with Issues (Paperback) 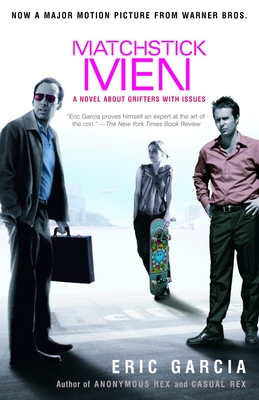 By Eric Garcia
Email or call for price.
Not Available

NOW A MAJOR MOTION PICTURE • A novel about grifters with issues, by the acclaimed cult author of Anonymous Rex and Casual Rex

Roy and Frankie are matchstick men—con artists. Partners in elegant crimes for years, they know each other like brothers and have perfected the rules of the game. Roy is the careful one, saves every penny. Frankie is the adventurous one, hungry for a big score. He wants Roy to join him in running a tricky game, but Roy is distracted by the discovery that he is the father of a punky teenage daughter from a brief marriage that ended years ago. The kid wants to get to know her father. She also wants to learn the family business. Novelist Eric Garcia takes readers into the fast and funny world of grifters with issues. Matchstick Men is a dazzling literary con game that will keep readers guessing until the last page.

Eric Garcia grew up in Miami, Florida, and attended Cornell University and the University of Southern California, where he majored in creative writing and film. He lives outside Los Angeles with his wife, daughter, and dachshund, and is currently at work on Hot and Sweaty Rex, the third novel in his acclaimed series about dinosaur detective Vincent Rubio. He is also developing a series for the Sci Fi channel based on the Rex novels. He can be reached via the Internet at www.ericgarcia.com.

“Eric Garcia proves himself an expert at the art of the con.” —The New York Times Book Review

“A very entertaining book . . . It is Eric Garcia who is the master flimflam man. . . . [His novels] share a wild imagination translated in a wry, no-fat writing style. . . . Matchstick Men fires up the fun, but [this] con man novel is also complex.” —USA Today

“Eric Garcia pulls off a nifty con game of his own with a hall-of-mirrors story where what you see is rarely what you get. It’s an elaborate shell game of mooks and motives, and when the pea is finally revealed, it’s the most dexterous sleight-of-hand since Kevin Spacey strolled out of a police station in The Usual Suspects.” —The Boston Globe

“Matchstick men are con artists who practice the subtle art of separating the innocent and clueless from their money. Eric Garcia . . . writes so convincingly and yet somehow sympathetically about the namesakes of his new novel that you’d swear he’s taken a few suckers himself.”—GQ

This feature require that you enable JavaScript in your browser.
END_OF_DOCUMENT_TOKEN_TO_BE_REPLACED