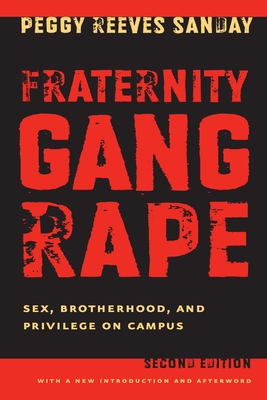 By Peggy Reeves Sanday
$26.00
Available from Our Distributor (5+ days shipping)

This widely acclaimed and meticulously documented volume illustrates, in painstaking and disturbing detail, the nature of fraternity gang rape. Drawing on interviews with both victims and fraternity members, Peggy Reeves Sanday reconstructs daily life in the fraternity, highlighting the role played by pornography, male bonding, and degrading, often grotesque, initiation and hazing rituals.

In a substantial new introduction and afterword, Sanday updates the incidences of fraternity gang rape on college campuses today, highlighting such recent cases as that of Duke University and others in the headlines. Sanday also explores the nature of hazing at sororities on campus and how Greek life in general contributes to a culture which promotes the exploitation and sexual degradation of women on campus. More broadly, Sanday examines the nature of campus life today and the possibility of creating a rape-free campus culture.

Peggy Reeves Sanday is Professor of Anthropology at the University of Pennsylvania. She is the author of many books, including A Woman Scorned: Acquaintance Rape on Trial and, most recently, Women at the Center: Life in a Modern Matriarchy.

This feature require that you enable JavaScript in your browser.
END_OF_DOCUMENT_TOKEN_TO_BE_REPLACED