How the Vote Was Won: Woman Suffrage in the Western United States, 1868-1914 (Hardcover) 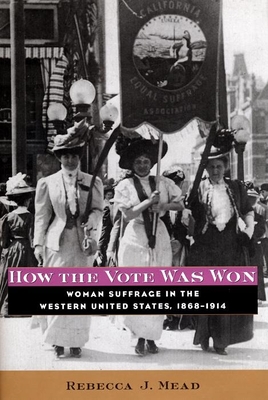 By Rebecca Mead
Email or call for price.
Get It In 1-5 Days

By the end of 1914, almost every Western state and territory had enfranchised its female citizens in the greatest innovation in participatory democracy since Reconstruction. These Western successes stand in profound contrast to the East, where few women voted until after the ratification of the Nineteenth Amendment in 1920, and the South, where African-American men were systematically disenfranchised. How did the frontier West leap ahead of the rest of the nation in the enfranchisement of the majority of its citizens? In this provocative new study, Rebecca J. Mead shows that Western suffrage came about as the result of the unsettled state of regional politics, the complex nature of Western race relations, broad alliances between suffragists and farmer-labor-progressive reformers, and sophisticated activism by Western women. She highlights suffrage racism and elitism as major problems for the movement, and places special emphasis on the political adaptability of Western suffragists whose improvisational tactics earned them progress. A fascinating story, previously ignored, How the Vote Was Won reintegrates this important region into national suffrage history and helps explain the ultimate success of this radical reform.

This feature require that you enable JavaScript in your browser.
END_OF_DOCUMENT_TOKEN_TO_BE_REPLACED