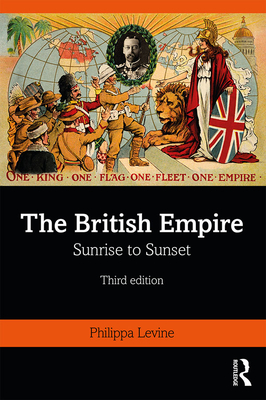 By Philippa Levine
Email or call for price.
Available from Our Distributor (5+ days shipping)

The British Empire: Sunrise to Sunset is a broad survey of the history of the British Empire from its beginnings to its demise that offers a comprehensive analysis of what life was like under colonial rule, weaving the everyday stories of people living through the experience of colonialism into the bigger picture of empire.

The experience of the British Empire was not limited to what happened behind closed doors or on the floor of Parliament. It affected men, women and children across the globe, making a difference to what they ate and what kind of work they did, what languages and lessons they learned in school, and how they were able to live their lives. This new edition expands its coverage and discusses the relationship between Brexit and empire as well as the recent controversies connected to empire that have engulfed Britain: the Windrush scandal, the fight over the Chagos Islands and the Mau Mau lawsuits, bringing it up to date and engaging with key debates that govern the study of empire.

Painting a picture of life for all those affected by empire and supported by maps and illustrations, this is the perfect text for all students of imperial history.

Philippa Levine holds the Walter Prescott Webb Chair in History at the University of Texas at Austin, United States. A native of Britain, she is the author of a number of books about Britain and the Empire as well as the history of prostitution and of eugenics.

This feature require that you enable JavaScript in your browser.
END_OF_DOCUMENT_TOKEN_TO_BE_REPLACED