The Beginning and End of Rape: Confronting Sexual Violence in Native America (Paperback) 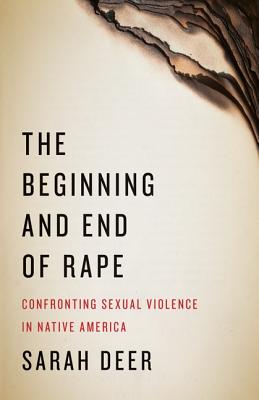 By Sarah Deer
$22.95
Available from Our Distributor (5+ days shipping)

The Beginning and End of Rape collects and expands the powerful writings in which Deer, who played a crucial role in the reauthorization of the Violence Against Women Act in 2013, has advocated for cultural and legal reforms to protect Native women from endemic sexual violence and abuse. Deer provides a clear historical overview of rape and sex trafficking in North America, paying particular attention to the gendered legacy of colonialism in tribal nations—a truth largely overlooked or minimized by Native and non-Native observers. She faces this legacy directly, articulating strategies for Native communities and tribal nations seeking redress. In a damning critique of federal law that has accommodated rape by destroying tribal legal systems, she describes how tribal self-determination efforts of the twenty-first century can be leveraged to eradicate violence against women. Her work bridges the gap between Indian law and feminist thinking by explaining how intersectional approaches are vital to addressing the rape of Native women.

Grounded in historical, cultural, and legal realities, both Native and non-Native, these essays point to the possibility of actual and positive change in a world where Native women are systematically undervalued, left unprotected, and hurt. Deer draws on her extensive experiences in advocacy and activism to present specific, practical recommendations and plans of action for making the world safer for all.

Sarah Deer, a 2014 MacArthur Fellow, has worked to end violence against women for more than twenty years. She began as a volunteer in a rape victim advocacy program and later received her JD with a Tribal Lawyer Certificate from the University of Kansas School of Law. She is a professor of law at William Mitchell College of Law in St. Paul, Minnesota. She is coauthor of three textbooks on tribal law and coeditor of Sharing Our Stories of Survival: Native Women Surviving Violence.

"This is a compelling and compassionate revelation of the eternal violence against Native women. It is a call to action for all of us."—The Honorable Ada E. Deer, former Assistant Secretary for Indian Affairs and enrolled Menominee

"Sarah Deer breaks down how the United States’ addiction to violence and capitalism only sustains the subjugation and exploitation of Indigenous women. As a survivor, I am thankful for Deer’s insight and theories on creating Indigenous frameworks of justice for victims, their families, and their communities."—Radmilla Cody, singer and advocate for anti-violence

"The Beginning and End of Rape documents the brutal history and contemporary reality of how rape has been used and continues to be used against Native women by the federal government to create a cultural implosion of destruction for generations. Rape, burn, and pillage continues when Native American women do not have equal protection of the law extended to us."—Charon Asetoyer, Executive Director, Native American Women’s Health Education Resource Center

"Deer is extremely thorough in her discussions of the history of rape law and its failings. She explores the meaning of rape in American society from a woman’s point of view. And she presents some possible strategies to begin to create equity, justice, and healing for victims of rape."—Indian Country Today

"The Beginning and End of Rape will change the way we as Native people approach sexual violence in our communities and the way tribal courts protect and advocate for victims. I have no doubt the book will become the new standard in social justice circles and will be required reading everywhere from online spaces to classrooms and courtrooms."—Native Peoples

"There is much for everyone to learn in this incisive, compelling, and thought-provoking volume."—Women’s Review of Books

"An outstanding work that not only explains why rape in Indian country has reached epidemic levels but also provides readers with practical solutions. Highly recommended."—CHOICE

"The Beginning and End of Rape marks an important contribution to growing scholarship around issues of gendered violence. Sarah Deer’s contribution is unique and pathbreaking." —Against the Current

This feature require that you enable JavaScript in your browser.
END_OF_DOCUMENT_TOKEN_TO_BE_REPLACED