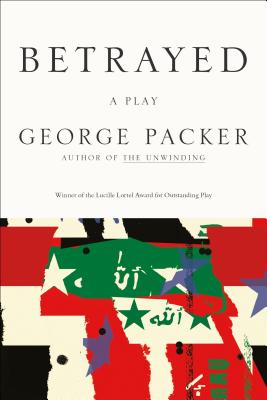 By George Packer
$16.00
Available from Our Distributor (5+ days shipping)

Based on George Packer's account in The New Yorker, Betrayed is a riveting and morally complex drama that explores in the Iraqis' own words the ways in which we have already abandoned them.

Millions of Iraqis, spanning the country's religious and ethnic spectrum, welcomed the overthrow of Saddam Hussein. But the mostly young men and women who embraced America's project so enthusiastically that they were prepared to risk their lives for it by aiding the U.S. forces constitute a small minority. On a cold, wet night in January 2007, George Packer met two such Iraqi men in the lobby of the Palestine Hotel, in central Baghdad to hear their story and those of other Iraqis working as translators and additional key personnel for the U.S. military and occupation authorities. They assumed that their perspective would be valuable to foreigners who knew little or nothing of Iraq. But instead of respect and gratitude, those who chose to help bridge the gap between the occupiers and the occupied were met with suspicion and hostility. They have been killed by insurgents and militias, ignored by U.S. officials, fired from their jobs without reason or recourse, and prevented from fleeing to the States for safety.

Betrayed had its world premiere in January 2008, off-Broadway at the Culture Project.

George Packer is a staff writer at The Atlantic, and the author of many previous books, including The Unwinding (winner of the National Book Award), The Assassins’ Gate, and Our Man (a finalist for the Pulitzer Prize and winner of the Los Angeles Times Book Award for biography).

"The clarity of the writing, the urgency of the story being told give the play a sharp dramatic impact and a plain-spoken beauty." —New York Post

This feature require that you enable JavaScript in your browser.
END_OF_DOCUMENT_TOKEN_TO_BE_REPLACED