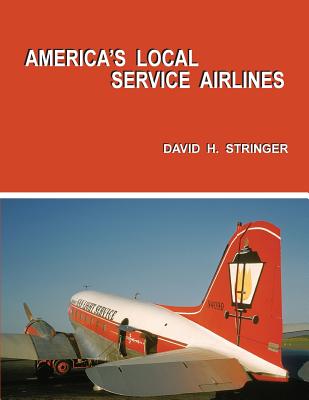 By David H. Stringer
$39.95
Available from Our Distributor (5+ days shipping)

In the 1950s and 1960s, the United States was blanketed by a group of air carriers that served virtually every nook and cranny of the 'Lower 48' states. Residents of smaller cities, such as Hazleton, Penn.; Moultrie, Ga.; and Gallup, N.M., could board a 21-28 passenger Douglas DC-3 at their hometown airport and be on their way to any place else in the world. The 13 airlines selected to provide this convenience eventually wound up serving 580 cities in the U.S. with a fleet of more than 400 aircraft. These were America's permanently-certificated Local Service Airlines.
The Locals, as they were called, received public service revenue, or "subsidy", from the federal government to cover the losses they incurred from providing transportation to places that did not generate enough passenger traffic to cover expenses.
In his book, Airlines of the United States Since 1914, Ron Davies remarks that "the ever-increasing amount of government subsidy that was required to keep the Local Service Airlines serving the small cities of America" (or 'Main Street, USA' as the carriers themselves liked to refer to their destinations) "persuaded those who cherished a vision of an ideal transport world to come to terms with economic realities." That was the crux of the local airline conundrum.
The purpose of this book is to preserve the history of the airlines that did succeed in bringing commercial air service to the small cities of the United States, using big aircraft: DC-3s, Convairs, Martins, and Fairchilds. They succeeded because the United States government subsidized their service through the agencies of the CAB and the United States Post Office Department (today's U.S. Postal Service). During the roughly 34 years that regulated local service was in play, from the announcement of the feeder airline experiment (1944) to the signing of the Airline Deregulation Act (1978), America's certificated Local Service Airlines provided small cities in the continental United States with dependable scheduled air service and a level of reliable, attractive and comfortable transportation that most of those cities have not seen since.

This feature require that you enable JavaScript in your browser.
END_OF_DOCUMENT_TOKEN_TO_BE_REPLACED