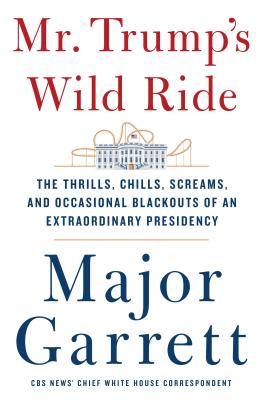 By Major Garrett
$28.99
Available from Our Distributor (5+ days shipping)

Major Garrett has been reporting on the White House for nearly two decades, covering four different presidencies for three news outlets. But if he thought that his distinguished journalistic career had prepared him for the unique challenges of covering Donald Trump, he was in for a surprise.

Like many others in Washington, Garrett found himself having to unlearn many of his own settled notions about the nature and function of the presidency. He also had to separate the carnival-like noise of the Trump presidency from its underlying substance. For even in its first half, Trump’s tenure has been highly consequential.

In Mr. Trump’s Wild Ride, Major Garrett provides what journalists are often said to do, but usually don’t: a true first draft of history. His goal was to sift through the mountains of distracting tweets and shrieking headlines in order to focus on the most significant moments of Trump’s young presidency, the ones that Garrett believes will have a lasting impact. The result is an authoritative, mature, and consistently entertaining account of one of the strangest eras in American political history.

A consummate professional with unimpeachable integrity, remarkable storytelling skills, and a deep knowledge of his subject earned through decades of experience, Garrett brings to life the twists and turns of covering this White House and its unconventional occupant with wit, sagacity and style. Mr. Trump’s Wild Ride should place him securely in the first rank of Washington journalists.

MAJOR GARRETT has been a fixture in executive branch reporting for seventeen years, serving as a White House correspondent for three news outlets during the last four administrations. He has been CBS News' chief White House correspondent since 2012, and is a substitute anchor of Face the Nation. GARRETT graduated from the University of Missouri with degrees in journalism and political science. A native of San Diego, he lives in Washington, D.C.

"Garrett’s assessment of Trump manages the difficult task of being both hard-hitting and even-handed, as well as smartly entertaining...The result is one of the best accounts yet of Trump’s impact.” —Publishers Weekly

This feature require that you enable JavaScript in your browser.
END_OF_DOCUMENT_TOKEN_TO_BE_REPLACED