The Rock: Through the Lens: His Life, His Movies, His World (Hardcover) 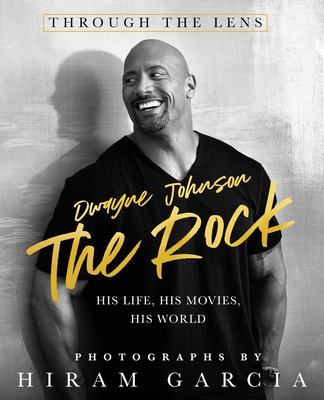 By Hiram Garcia
$35.00
Available from Our Distributor (5+ days shipping)

Dynamic, funny, and inspiring photos of global entertainment icon, entrepreneur, and trailblazer, Dwayne "The Rock" Johnson, featuring twenty years' worth of candids, family moments, and snapshots from film and television sets, many never-before-seen.

Hiram Garcia, who has known Dwayne Johnson since college, is a longtime collaborator, producing partner, and talented photographer. As a film and television producer as well as in his role as the President of Production at Seven Bucks Productions, Garcia has unprecedented access to capture images on the sets of Seven Bucks’ films including such blockbuster hits as Jumanji: The Next Level, Jungle Cruise, Fast and Furious Presents: Hobbs & Shaw, and more.

As one of his closest friends, Garcia knows Johnson inside and out, and that deep relationship informs the photographs he shares in this book. Whether it’s an action-packed photo snapped during an intense film take, or a relaxed and candid shot of Johnson with his daughters, Garcia focuses his lens on the qualities he most admires in his friend: his extraordinary work ethic, his infectious smile, his empathy and sense of humor, and the joy and determination Johnson brings to everything he does.

With scores of photos—most of them never been seen before and taken over two decades—The Rock: Through the Lens: His Life, His Movies, His World is enhanced by captions revealing the inside stories behind these remarkable images.

HIRAM GARCIA is the President of Production at Seven Bucks Productions, a passionate photographer, and a film and television producer whose films have amassed over $4 billion in box-office revenue. A trusted collaborator in the production process to Seven Bucks co-founders, Dwayne Johnson and Dany Garcia, Garcia oversees all production operations from development to release. In addition to producing projects, Garcia loves to get behind his own camera and is an ambassador for legendary camera company Leica. Garcia’s work has been featured in print and digital media and he opened his first gallery in 2019, with many more projects in the works. Because of his active schedule, Hiram likes to shoot whatever crosses his path – whether it is actors on set, waterfalls in Hawaii, empty roads or his favorite subject, his dog. He likes seeing a moment and creating a replica of it, something special that evokes an emotion. Born and raised in New Jersey, Garcia is a graduate of the University of Miami, where he earned his bachelor’s degree in music business and entertainment.

This feature require that you enable JavaScript in your browser.
END_OF_DOCUMENT_TOKEN_TO_BE_REPLACED