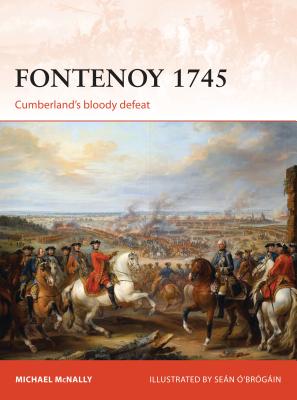 By Michael McNally, Seán Ó’Brógáin (Illustrator)
Email or call for price.
Not Available

This is book number 307 in the Campaign series.

A disputed succession to the Austrian throne led to general war between the leading powers of Europe in 1740, with France, Spain and Prussia on one side, and Britain, Hapsburg Austria and the Dutch Republic on the other. While fighting occurred across the globe, the bloodiest battles were fought on the European continent, with none more costly than the battle of Fontenoy in 1745.

Fearing an encirclement of France by a resurgent Hapsburg-controlled Austria, the French commander Marshall Saxe planned to overrun the Austrian Netherlands, thereby dealing a decisive blow against their enemy's ability to wage war. Saxe's army, the cream of the French military, invaded and set up a defensive position at Fontenoy, near Tournai--daring his enemies to knock him off his perch. This title, beautifully illustrated with full color plates, is an in-depth study of the British Duke of Cumberland's attempt to assault Saxe's position. It focuses on the inability of allied leaders to coordinate their attacks and how Cumberland came within a whisker of achieving a major victory.

Seán Ó'Brógáin lives and works in Donegal, Ireland. He has a BA (Hons) in Scientific and Natural History illustration from Lancaster University, and has worked for a wide range of clients. In addition to his stunning work for Osprey Publishing, he has collaborated with the University of Manchester, An Post, the National Museum of Ireland, the Irish Office of Public Works and a variety of media companies, museums, councils and private individuals.

This feature require that you enable JavaScript in your browser.
END_OF_DOCUMENT_TOKEN_TO_BE_REPLACED