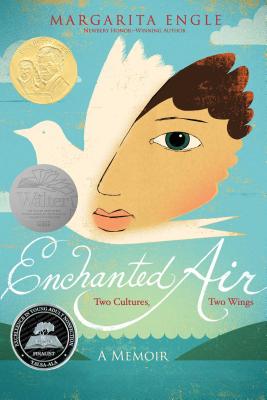 In this poetic memoir, which won the Pura Belpré Author Award, was a YALSA Nonfiction Finalist, and was named a Walter Dean Myers Award Honoree, acclaimed author Margarita Engle tells of growing up as a child of two cultures during the Cold War.

Margarita is a girl from two worlds. Her heart lies in Cuba, her mother’s tropical island country, a place so lush with vibrant life that it seems like a fairy tale kingdom. But most of the time she lives in Los Angeles, lonely in the noisy city and dreaming of the summers when she can take a plane through the enchanted air to her beloved island. Words and images are her constant companions, friendly and comforting when the children at school are not.

Then a revolution breaks out in Cuba. Margarita fears for her far-away family. When the hostility between Cuba and the United States erupts at the Bay of Pigs Invasion, Margarita’s worlds collide in the worst way possible. How can the two countries she loves hate each other so much? And will she ever get to visit her beautiful island again?

Margarita Engle is the Cuban American author of many books including the verse novels Your Heart, My Sky; With a Star in My Hand; The Surrender Tree, a Newbery Honor winner; and The Lightning Dreamer. Her verse memoirs include Soaring Earth and Enchanted Air, which received the Pura Belpré Award, a Walter Dean Myers Award Honor, and was a finalist for the YALSA Award for Excellence in Nonfiction, among others. Her picture books include Drum Dream Girl; Dancing Hands; and The Flying Girl. Visit her at MargaritaEngle.com.

"In Margarita Engle's hauntingly beautiful memoir, readers can't help but feel as if they are pressing their hands with her against ancient cave walls and at the same time falling asleep in a darkened room full of fireflies. Engle's struggle to unite her twin selves—the Cuban girl who rides bareback with her cousins under a hot, steamy sun and the American girl who pretends to smoke in the school bathroom—lead the way to 'Herds of wild feelings/long extinct.' This is a book to return to, page after page, line after line. Exquisite."
— Kathi Appelt, author of The Underneath, Newbery Honor and National Book Award Finalist

* "A deeply personal memoir-in-verse filled with Engle’s trademark intricately woven lyricism. The author’s memories focus on the first 14 years of her life, beginning with idyllic summers spent in her mother’s homeland of Cuba and ending during the aftermath of the Cuban Missile Crisis and subsequent travel ban. Engle captures the heart of a quiet, young girl torn between two cultures. This historical memoir/love poem to Cuba couldn’t be more timely. With the recent easing of relations with Cuba, teachers can use the text as an accessible entry point into the history behind this very current event. And while the narrative unfolds over 50 years ago, Engle’s experiences will still resonate with adolescents and teens today. Any child who has felt like an outsider will recognize themselves in Margarita’s tale. When the Cuban Missile Crisis ended and everyone’s focus shifted, the author was left confused, empty and unfulfilled by her school’s seemingly senseless focus on what felt like irrelevant historical events. What American child with ties to a country experiencing turmoil couldn’t relate to the lingering after-effects of far off events in our era of two-minute news bytes? VERDICT: A more than worthwhile purchase for any library in need of a universally applicable coming-of-age tale, a fantastic new memoir-in-verse, or a glimpse into Cuba’s past."
— School Library Journal, May 2015, STARRED REVIEW

* "Poet and novelist Engle has won a Newbery Honor, the Pura Belpré Award, and the Américas Award, among others.... This time she brings readers her own childhood. Employing free verse, she narrates growing up in Los Angeles in the 1950s and early '60s torn by her love of two countries: the United States, where she was born and raised, and Cuba, where her mother was from and where she spent vacations visiting family. Woven into the fabric of her childhood is the anxiety of deteriorating relations between the two countries as the Cuban revolution takes place, affecting both her family and the two countries at large.... Though it is a very personal story, it is also one that touches on issues affecting so many immigrants.... As so many of our children are immigrants or children of immigrants, we need more of these stories, especially when they are as beautifully told as this one."
— Kirkus Reviews, May 2015, STARRED REVIEW

* "Reflecting on her childhood in Los Angeles and her Cuban heritage, Engle’s memoir in verse is, indeed, nothing short of enchanting. Descriptions of Cuba as a tropical paradise and the home of her beloved abuelita come alive in the spare free-verse poems. She evocatively addresses weighty issues, such as her mother’s homesickness, being bicultural, the challenge of moving homes and schools, the Cuban Revolution, and negotiating an identity that is being torn apart by politics and social attitudes at complete odds with her feelings and experiences. With characteristic precision, Engle captures a range of emotions and observations salient to a young girl.... In addition to the arresting content that provides many opportunities for learning, the craft of this memoir lends itself to creative exploration in the classroom.... The book’s poignancy and layered beauty make it a worthy addition to any collection and a fitting companion to Jacqueline Woodson’s Brown Girl Dreaming (2014) and Thanhha Lai’s Inside Out and Back Again (2011)."
— Booklist, May 2015, STARRED REVIEW

This feature require that you enable JavaScript in your browser.
END_OF_DOCUMENT_TOKEN_TO_BE_REPLACED