Das Reboot: How German Soccer Reinvented Itself and Conquered the World (Paperback) 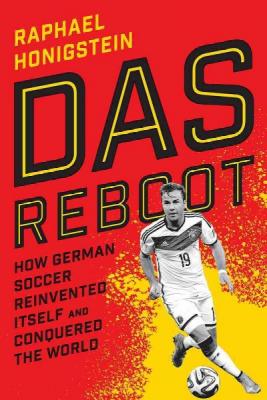 By Raphael Honigstein
Email or call for price.
Not Available

"A beautiful story, expertly told." -- Per Mertesacker, Arsenal defender and member of the German national team, winners of the 2014 World Cup

EstÃ¡o do Maracan", July 13, 2014, the last ten minutes of extra time in the World Cup Final: German forward Mario GÃ¶ jumps to meet a floated pass from Andr' SchÃ¿ cushions the ball with his chest, and in one fluid motion volleys the ball past the onrushing Argentine goalkeeper into the far corner of the net. The goal wins Germany the World Cup for the first time in almost thirty years. As the crowd roars, GÃ¶ looks dazed, unable to comprehend what he has done.

In Das Reboot, Raphael Honigstein charts the return of German soccer from the dreary functionality of the late 1990s to GÃ¶'s moment of sublime, balletic genius and asks: How did this come about? The answer takes him from California to Stuttgart, from Munich to the Maracan", via Dortmund and Amsterdam. Packed with exclusive interviews with key figures, including JÃ¿Klinsmann, Thomas MÃ¿ Oliver Bierhoff, and many more, Honigstein's book reveals the secrets of German soccer's success.

Raphael Honigstein is the author of Das Reboot and the top expert on German soccer. He is a columnist for the Guardian and ESPN, writes for Suddeutsche Zeitung and Sport 1 in Germany, and appears as a pundit for BT Sport and ESPN, as well as Sky Sports in Germany. He is also a regular fixture on the Guardian's award-winning podcast Football Weekly.

“A peerless glimpse into how German soccer has rebooted itself into a global superpower.” –Top Drawer Soccer

“Brisk and lively…. A fascinating story well-told and a must-read for coaches, players, fans and administrators at every level of the U.S. soccer pyramid.” –SoccerWire

“There is no question that Raphael Honigstein is the world's top expert on German soccer. It's no accident that his most recent offering, Das Reboot: How German Soccer Reinvented Itself and Conquered the World, is one of the most promising books of the year. It is a definitive text on the modern German game, much like David Winner's Brilliant Orange was for Dutch football.” –International Soccer Network

“What Michael Lewis did for baseball with his best-selling Moneyball and Cameron Stauth did for basketball in The Franchise, soccer columnist Honigstein does for soccer as he re-creates the dramatic rise of the German game, and that country's path toward becoming World Cup champions in 2014…. The result, like Germany's team, is at the championship level.” –Library Journal—-

“[A] tale of unsung innovators as well as national heroes.” –The Economist

“Masterfully conceived…Das Reboot feels fluid and comprehensive, a thorough survey of German soccer over the last fifty years that's also light on its feet…. If this all sounds too technical for the casual fan, Honigstein's charming, personable voice keeps the book absorbing even for those uninterested in tactics and formations.” –The New Republic

“As Raphael Honigstein points out in this often mesmerising account of one country's struggle for sporting excellence, last year's World Cup win was seen as a validation of the German way of life…. Honigstein tells the story with panache and exactly the same kind of eye for detail he's writing about. Is it too much to hope that the football authorities over here may read this book and be inspired to try something similar? I think we all know the answer to that one.” –The Independent (UK)

This feature require that you enable JavaScript in your browser.
END_OF_DOCUMENT_TOKEN_TO_BE_REPLACED