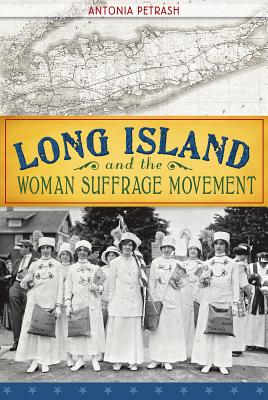 By Antonia Petrash
Email or call for price.
Not Available

Long Island and the Woman Suffrage Movement documents the historical movement of the right to vote for women in New York.

For seventy-two years, American women fought for the right to vote, and many remarkable ladies on Long Island worked tirelessly during this important civil rights movement. The colorful--and exceedingly wealthy--Alva Vanderbilt Belmont was undoubtedly the island's most outspoken and controversial advocate for woman suffrage. Ida Bunce Sammis, vigorous in her efforts, became one of the first women elected to the New York legislature. Well-known Harriot Stanton Blatch, daughter of Elizabeth Cady Stanton, worked with countless other famous and ordinary Long Islanders to make her mother's quest a reality. Author Antonia Petrash tells the story of these and other women's struggle to secure the right to vote for themselves, their daughters and future generations of Long Island women.

This feature require that you enable JavaScript in your browser.
END_OF_DOCUMENT_TOKEN_TO_BE_REPLACED