Outpedaling the Big C: My Healing Cycle Across America (Hardcover) 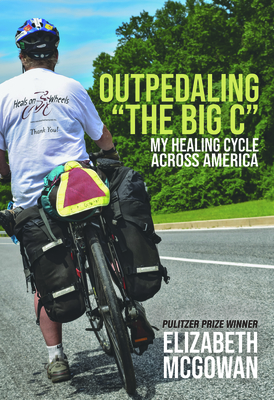 By Elizabeth McGowan
$28.95
On Our Shelves Now

Elizabeth McGowan was born in Philadelphia in 1961. She spent most of her childhood there, running around with her four sisters and tip-toeing past her often angry father, Ron McGowan, who was a gifted teacher. At such a young age, she could never have imagined where she would be years later―living with the same cancer that killed her father when she was just fifteen. She was diagnosed with melanoma in the 1980s, several times in very similar spots to her father's. McGowan graduated from the University of Missouri-Columbia School of Journalism with a Bachelor of Journalism degree. She started her journalism career at daily newspapers in Wisconsin and Vermont, which she worked while enduring several bouts of melanoma. In the 1990s, she won numerous explanatory writing and reporting awards from the Wisconsin Newspaper Association, the Milwaukee Press Club, the American Heart Association, and the Wisconsin Association of School Boards while a general assignment and feature writer, first for The Janesville Gazette and then for the Racine Journal Times. In 2007, McGowan won second place in the Cleveland Press Club's Ohio Excellence in Journalism Awards contest in the public service/investigative category for two stories published by Crain Communications about the five-year anniversary of Sept. 11; one story focused on the compromised health of cleanup workers, and the other on the environmental complications associated with razing the Deutsche Bank building near the Twin Towers site in New York. In 2013, she won the Pulitzer Prize for National Reporting for "The Dilbit Disaster: Inside the Biggest Oil Spill You've Never Heard Of." She was the lead reporter for a three-person team at the digital news startup, InsideClimate News. The e-book version of the series won the Rachel Carson Book Award from the Society of Environmental Journalists that same year. The series, "Dilbit Disaster," won the James Aronson Award for social justice reporting in 2013 along with an honorable mention for the John B. Oakes Award for Distinguished Environmental Reporting; it was also a finalist for the Scripps Howard Foundation Award. Today, she is an author and a Pulitzer Prize-winning energy and environment reporter who is dedicated, savvy, endlessly curious, adept at finding sources, and able to present complicated topics in straightforward and compelling language. Her first book, Outpedaling "The Big C," shows just how incredible a person she is―a woman with an urge to heal and discover through endless adventures. She continues to work as a freelance reporter in Washington D.C.; several of her articles can be found at https: //energynews.us/author/emcgowan/ along with her own digital startup (www.renelwalnews.org), where original reporting explores the intersection of nature, labor, and energy in feature stories and investigative news pieces. She lives in Washington, DC, with her husband Don.

This feature require that you enable JavaScript in your browser.
END_OF_DOCUMENT_TOKEN_TO_BE_REPLACED