Globalization: Why We Care about Faraway Events (Inquire & Investigate) (Hardcover) 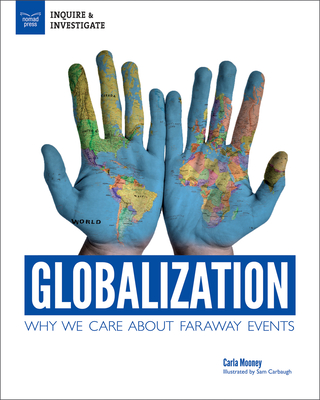 Have you noticed that our planet is becoming increasingly connected?

At the supermarket, you can buy food from all around the world, including olive oil from Greece, cheese from France, and coffee from South America. At home, you surf the Internet on a computer made in Asia, reading news from many different countries. Your parents might drive a car made in America, Japan, or Germany while you listen to music from American and Canadian pop stars on the radio.

For centuries, people from different societies and cultures have made contact with each other and exchanged goods and ideas. Globalization is not a new thing, but in recent years, advances in transportation and technology have made it easier than ever to connect with people everywhere, whether they are sitting next to you on a bus, waiting for you at home, or sitting on a different bus halfway around the globe. Jet airplanes and great ocean ships carry people and goods everywhere in the world. Cell phones, computers, the Internet, and social media allow people to communicate instantly, no matter where they are. Through globalization, the world is becoming more interconnected and interdependent. Is globalization a good thing? Does globalization benefit all world citizens, rich and poor? Or does it only benefit a few, while harming others?

In this civics book, middle grade students are encouraged to think critically about how globalization affects local and global communities. Globalization: Why We Care About Faraway Events teaches students about a crucial topic in a fact-based way that promotes empowerment and understanding. Investigations and hands-on experiments provide students with problem-solving opportunities that help students determine the right balance between the benefits and costs associated with globalization. Projects such as tracking the origins of different objects and devices you might find at home lead readers through an inquiry-based, open-ended investigation with plenty of room to explore individual creativity.

Globalization is one book in a set of four that explore great events of the twentieth century. Other titles in this set include The Vietnam War; World War II: From the Rise of the Nazi Party to the Dropping of the Atomic Bomb; and The Space Race: How the Cold War Put Humans on the Moon.

Carla Mooney has written more than 70 books for children and young adults. She is the author of several books for Nomad Press, including Terrorism: Violence, Intimidation, and Solutions for Peace; Evolution: How Life Adapts to a Changing Environment; The Holocaust: Racism and Genocide in World War II; and Comparative Religion: Investigate the World through Religious Tradition. She lives in Pittsburgh, Pennsylvania. Sam Carbaugh has illustrated several books for Nomad Press, including Forensics: Uncover the Science and Technology of Crime Scene Investigation and Shakespeare: Investigate the Bard's Influence on Today's World. He wrote and illustrated Comics: Investigate the History and Technology of American Cartooning. Sam lives in Grand Rapids, Michigan.

This feature require that you enable JavaScript in your browser.
END_OF_DOCUMENT_TOKEN_TO_BE_REPLACED