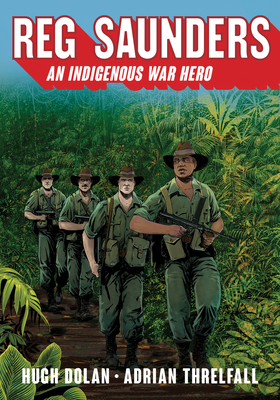 By Hugh Dolan, Adrian Threlfall
Email or call for price.
Not Available

Reg Saunders MBE not only survived the World War II battlefields in the Middle East, North Africa, Greece, Crete, and New Guinea, but excelled as a military leader. He was recommended for officer training and, in 1944, returned to New Guinea as a platoon commander—the first Aboriginal Australian to serve as a commissioned officer. What happened during the war to transform a determined young soldier from country Victoria into a war hero—one who would go on to serve with distinction in the Korean War, and become a pioneering figure for Indigenous rights?

Hugh Dolan is a former intelligence officer with the Royal Australian Air Force. He is the author of 36 Days: The Untold Story behind the Gallipoli Landings,and Gallipoli: The Landing, presenter of the documentary Gallipoli from Above, and a general military historian-at-large. Adrian Threlfall is a lecturer in history at Victoria University in Melbourne, and a member of the education team at the Shrine of Remembrance, Victoria. A former infantryman in the Australian Army Reserve, he is also the author of Jungle Warriors, which explores Australia’s role in jungle warfare in World War II.

This feature require that you enable JavaScript in your browser.
END_OF_DOCUMENT_TOKEN_TO_BE_REPLACED