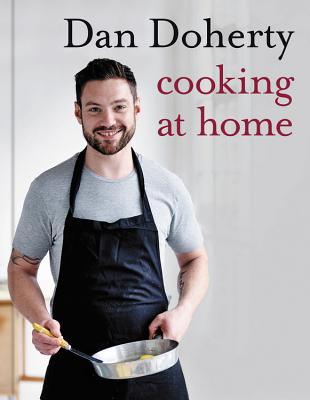 By Dan Doherty
Email or call for price.
Out of Print

'There's serious talent in this kitchen' - Tom Parker Bowles, the Mail on Sunday
Award-winning chef Dan Doherty returns with his third cookbook, in which he shares crowd-pleasing recipes inspired by his favorite dishes to make at home. This is comfort food with a twist - nourishing, reliable recipes with Dan's individual stamp on each dish.
Dan's recipes will inspire you to spend more time in the kitchen whatever the occasion, be it a Tuesday night supper of Sweet Potato and Black Bean Chili Bake, Slow Roast Pork Belly with Jerusalem Artichoke and Pearl Barley Risotto to impress friends at a dinner party, or Butterflied Herby Roast Leg of Lamb followed by Brown Butter Cheesecake for a family Sunday lunch.
It includes sections on Breakfasts; Lunch Boxes; Snacks, Nibbles and Starters; Mains; and Desserts, as well as Feasts and Seasonal Menus.

Dan Doherty is a judge on the BBC1's primetime series, Britain's Best Home Cook alongside Mary Berry. He was the Chef Director at London's Duck & Waffle, with a restaurant on the 40th floor of Heron Tower in the City of London and the more informal Duck & Waffle Local in London's West End. He won Tatler's Rising Star Chef award at their 2013 Restaurant Awards and the Guardian declared him 'among the high priests of Britain's culinary revival'.
He has appeared on BBC 1's Saturday Kitchen and Channel 4's Sunday Brunch and regularly speaks and demonstrates at festivals and events including Taste London and Meatopia. His previous books include Duck & Waffle and Toast Hash Roast Mash, also published by Mitchell Beazley

This feature require that you enable JavaScript in your browser.
END_OF_DOCUMENT_TOKEN_TO_BE_REPLACED