The Case for the Green New Deal (Paperback) 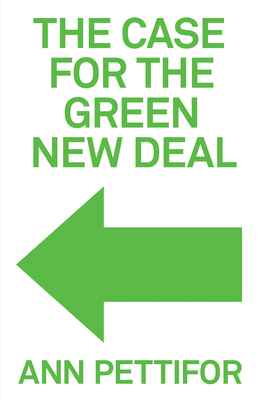 What is the Green New Deal and how can we afford it?

To protect the future of life on earth, we need to do more than just reimagine the economy—we have to change everything. One of the seminal thinkers of the program that helped ignite the US Green New Deal campaign, Ann Pettifor explains how we can afford what we can do, and what we need to do, before it is too late.

The Case for the Green New Deal argues that economic change is wholly possible, based on the understanding that finance, the economy and the ecosystem are all tightly bound together. The GND demands total decarbonization and a commitment to an economy based on fairness and social justice. It proposes a radical new understanding of the international monetary system. Pettifor offers a roadmap for financial reform both nationally and globally, taking the economy back from the 1%. This is a radical, urgent manifesto that we must act on now.

Ann Pettifor is the Director of Prime (Policy Research in Macroeconomics) and a Fellow of the New Economics Foundation. She is known for her leadership of the Jubilee 2000 campaign. In 2015 she was invited onto the economic advisory board of the British Labour Party by Jeremy Corbyn. She is the author of The Real World Economic Outlook and The Coming First World Debt Crisis and in 2008 co-author of The Green New Deal. She lives in London

“Demanding drastic, even impossible change—as … Pettifor [does]—may just be a way to ensure that something is done.”
—Jonathan Ford, Financial Times

“Clear, concise, and well put … a crash course in the economics and history of the policy bundle, as well as a roadmap to implementing it.”
—Bright Green

“This awareness-raising contribution to an important debate should expand our understanding of what’s possible and encourage us to take action.”
—Labour Briefing

“The Case for the Green New Deal succinctly explains what the GND is, where the idea came from, why it’s necessary, and how to make it happen. As an economist and expert in monetary theory, Pettifor is uniquely well placed to describe how the GND can be funded.”
—Morning Star

“What still distinguishes Pettifor’s thinking about the Green New Deal is the way that it tackles not only the climate crisis but also the financial system that helped create it.”
—Sierra Magazine

“Pettifor has a rare approach, both radical and intricate”
—Zoe Williams, Guardian

“The Case for the Green New Deal … serves to inform and inspire a politics of alternatives to the otherwise forthcoming destruction of our planet.”
—Counterfire

“Crucially, Pettifor debunks the idea that we could not afford to fund [a Green New Deal], arguing that the state is capable of financing a zero-emissions programme if constraints are put on moving capital. “
—Independent (“Best Climate Change Books”)

This feature require that you enable JavaScript in your browser.
END_OF_DOCUMENT_TOKEN_TO_BE_REPLACED