The Sword of Persia: Nader Shah, from Tribal Warrior to Conquering Tyrant (Paperback) 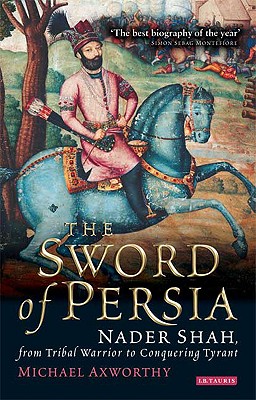 By Michael Axworthy
Email or call for price.
Available from Our Distributor (5+ days shipping)

Nader Shah, ruler of Persia from 1736 to 1747, embodied ruthless ambition, energy, military brilliance, cynicism and cruelty. His reign was filled with bloodshed, betrayal and horror. Yet Nader Shah is central to Iran's early modern history. From a shepherd boy he rose to liberate his country from foreign occupation, and make himself Shah. He took eighteenth-century Iran from political collapse to become the dominant power in the region, recovering Herat and Kandahar, conquering Moghul Delhi, plundering the enormous treasures of India, repeatedly defeating Ottoman Turkey, and overrunning most of what is now Iraq.But suspicion and avarice led him to persecute the Persian people as savagely as any foreign conqueror had done. "The Sword of Persia" recreates the story of a remarkable, ruthless man, capable of both charm and brutality, who became a monster of insane cruelty. It is a rich narrative, full of dramatic incident, including much new research into original Iranian and other material, which will prove indispensable to historians and students.

Michael Axworthy teaches Middle East history at Exeter University. Before deciding on an academic career he was head of the Iran Section in the Foreign and Commonwealth Office and has frequently travelled to Iran, both as a diplomat and an historian. He is also the author of Iran: Empire of the Mind: A History from Zoroaster to the Present Day.

"The best biography of the year, Axworthy’s The Sword of Persia has rescued Nader Shah from obscurity and created not only a brilliant human portrait of tyranny, conquest, cruelty and insanity but also a superb introduction to Iran itself which makes this book not just a beautifully-written compelling work but one that is also utterly relevant today."--Simon Sebag Montefiore

"Michael Axworthy has done an outstanding job of trying to understand what moved Nadir...the result is a book that is informative and a pleasure to read, for specialists and non-specialists alike. Thanks to the author’s deft handling of the subject, Nadir as a person becomes real and his actions become understandable...well researched...this a great book and an excellent read that you can even take to the beach."--Willem Floor, Middle East Journal

"both scholarly and highly readable from start to finish...valuable for both specialists and graduate students of history...this new volume presents a wealth of information hitherto unknown and offers some fresh and unique interpretations on the rise and reign of Nader Shah Afshar."--George Bournoutian, American Historical Review

"I have read this book with considerable pleasure and admiration...Axworthy has taken account of the latest research, contributed to that himself, and produced a book that will be welcomed by specialists and the wider history minded public."--Charles Melville, Pembroke College, Cambridge

"Nader Shah has been too long neglected, and Michael Axworthy's The Sword of Persia provides new and valued insight into his critical role in Iran's 18th-century history."--Professor Gene Garthwaite, Dartmouth College

"This is, without any doubt, a valuable book.  Axworthy gives a fascinating picture of Iran in the 18th century and provides a key to the better understanding of many of the issues after Nadar Shah relating to the Zand and Qajar eras."--Professor Sadegh Zibakalam, Tehran University

This feature require that you enable JavaScript in your browser.
END_OF_DOCUMENT_TOKEN_TO_BE_REPLACED