She Went: An American Woman's Secret Wish to Travel to India and How It Manifested Into Reality. (Paperback) 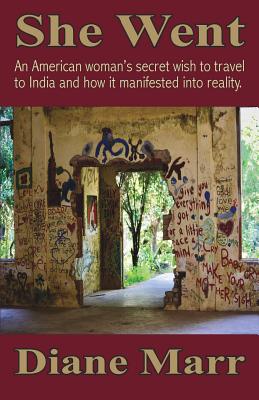 By Diane Marr
$17.50
Available from Our Distributor (5+ days shipping)

Always traveling, Diane Marr moved from the east coast of the USA to the west and back again - but she had never been to India. Diane eventually settled in Oregon. After 20 years as a small business owner, she was diagnosed with Hashimoto's thyroiditis making her trip to India all the more challenging.

Raised by a single mother always on the lookout for a better paying job or a cheaper place to live, Diane moved a lot while growing up. As the perpetual new kid in town, she evolved into the observer. This would later provide a rich reserve with which to draw from when writing. The gypsy lifestyle seemed to be a family trait. Her grandparents spent time in Mexico every summer and lived in many exotic places. One fond memory is spending Christmas in Puerto Rico where they told her Santa would arrive by helicopter. In adulthood, she continued the pattern of moving from place to place, and when she couldn't move house she'd rearrange the furniture. Traveling from east coast to west and back again, Diane eventually settled in Oregon. The longest she's lived anywhere, Oregon somehow kept her attention and before long 28 years had passed. After retiring from the corporate world and 20 years as a small business owner, she now spends most days in her garden, her 2 cats by her side. Diane can be contacted at https: //shewent.m

This feature require that you enable JavaScript in your browser.
END_OF_DOCUMENT_TOKEN_TO_BE_REPLACED