Super Pop!: Pop Culture Top Ten Lists to Help You Win at Trivia, Survive in the Wild, and Make It Through the Holidays (Paperback) 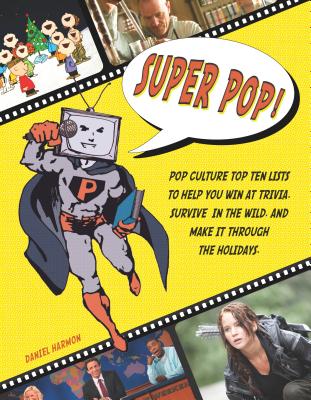 By Daniel Harmon
Email or call for price.
Out of Print

Super-Pop offers a maximum-pleasure, minimum-effort way to become smarter, happier, and more likely to survive your next family function (or a shark attack). This hilarious and wide-ranging guide sorts nearly 500 different bestsellers, blockbusters, and underappreciated gems into quirky top ten lists, like “Outwit Death: Essential Lessons in Survival,” and “Achieve Mindfulness: Movies That Will Show You the Way (With Wise Elders Now Included).”  So whether you’re looking for some motivational workout music, need help planning a July 4th double feature, or just want to pick up some knowledge without straining your brain, this book has you covered. With new insights on old classics and fresh ideas for jaded eyes, Super Pop makes sense of pop culture – and then puts pop culture back to work!

Daniel Harmon is a former staff writer for Brokelyn.com, an occasional essayist on the topic of Tommy Wiseau's film The Room, and the author of the book Super Pop! Pop Culture Top Ten Lists to Help You Win at Trivia, Survive in the Wild, and Make It Through the Holidays (2013).

IndieFab Award Finalist
“Super Pop is as snappy as its title—a wonderful gateway to broadened horizons for current and future pop culture obsessives.”
—Matt Zoller Seitz, New York Magazine, television critic
“Thanks to Super Pop, you’ll never be caught without a pop culture recommendation—or ten—to fit every social setting (and fill many weekday nights at home as well).”
—Ethan Alter, Television Without Pity, film critic
“Super Pop is the Holy Grail for ALL your social and antisocial needs. Daniel Harmon’s book is smarter than your average bear, funnier than your average LOLcat, and more useful than a dozen remote controls. In a top ten list of the top ten “top ten” books, Super Pop goes straight to number one.”
—Nancy Holder, New York Times bestselling author of Buffy: The Making of a Slayer
“This book of annotated lists reads like an effective study guide for your next trivia night…(the) content is actually far more substantial than first impressions would imply…This is a go-to resource for teens looking to bone up on pop culture, sound interesting at a party, or craft the perfect playlist for a workout.” —Booklist
“For anyone who has ever felt the slightest bit deficient in their pop-culture expertise, here is the ultimate guide, guaranteed to fill any void….The bizarre choices will prompt many double takes and lots of laughter….A weird, witty, endlessly entertaining compendium for the budding pop-culture aficionado.” —Kirkus Reviews

"Super Pop bursts with titillating pop cultural tidbits and trivia . . . Author Daniel Harmon’s intent when he wrote Super Pop was to go beyond the usual lists of movies, books, and trivia, that Harmon calls 'unsurprising' and create exciting lists that spark the imagination, and 'go beyond the old standard and a few new staples.' Super Pop achieves this with flying colors." —ForeWord Reviews

"Highly intriguing...Harmon envisions a world where his audience will take these recommendations, discover new things, and add to the cultural archive with their own lists and recommendations. In this way, everyone will have an investment in keeping artifacts of pop culture from 'slipping through the cracks,' as he put it. 'I did not intend these lists to be an endpoint,' Harmon said, 'but rather a beginning.'" —Flavorwire

This feature require that you enable JavaScript in your browser.
END_OF_DOCUMENT_TOKEN_TO_BE_REPLACED