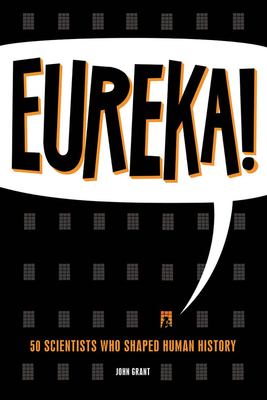 By John Grant
Email or call for price.
Out of Print

Galileo, Einstein, Curie, Darwin, Hawking — we know the names, but how much do we really know about these people? Galileo gained notoriety over his battle with the Vatican, but did you know that this “father of modern science” was also an accomplished lute player? And Darwin of course discovered the principle by which new species are formed, but his bold curiosity extended to the dinner table as well. (And how many people can say they’ve eaten an owl!) In Eureka! John Grant — author of Debunk It!, Discarded Science, Spooky Science and many others — offers fifty vivid portraits of groundbreaking scientists. From lutes and owls to astronomy and evolution, Eureka! explains how these scientific geniuses have shaped our understanding – and how they spent their free time as well.

John Grant is author of about seventy books, including the highly successful Discarded Science, Corrupted Science, and Denying Science. For a number of years he ran the world-famous fantasy artbook publisher Paper Tiger. He has won the Hugo Award (twice), the World Fantasy Award, and various other international literary awards.

“[A] rich and lively history of scientific innovation. “–Publishers Weekly

“This is a comprehensive collective biography of the most formative people in human intellectual history, each selected because without their personal contributions the modern world would not exists as readers know it. . . bring[s] a relatability to these highly intelligent people that will keep readers engaged.”–Booklist

This feature require that you enable JavaScript in your browser.
END_OF_DOCUMENT_TOKEN_TO_BE_REPLACED