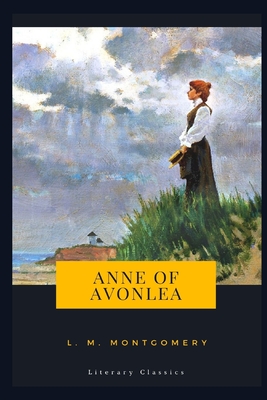 By L. M. Montgomery
$9.99
Available from Our Distributor (5+ days shipping)

Anne of Green Gables, children's novel by Canadian author Lucy Maud Montgomery, published in 1908. The work, a sentimental but charming coming-of-age story about a spirited and unconventional orphan girl who finds a home with elderly siblings, became a classic of children's literature and led to several sequels. Matthew Cuthbert and his sister, Marilla, live in Avonlea on Canada's Prince Edward Island. Needing help on their farm, Green Gables, they apply to adopt a boy from an orphanage. By mistake, however, a red-haired, freckle-faced 11-year-old girl named Anne Shirley is sent to the siblings. While Matthew instantly takes to Anne, Marilla is unsure about keeping her. However, the cheerful and highly imaginative Anne gradually transforms the joyless lives of shy Matthew and prim Marilla, and they come to view her as a daughter. However, not everything about Avonlea is idyllic, and the quick-tempered Anne has two nemeses: the hypercritical Mrs. Rachel Lynde, who she eventually wins over, and Gilbert Blythe, a classmate who insults Anne by calling her "carrots"-she is sensitive about her looks, especially her red hair-and sets off a long-simmering feud; the two become friends by the end of the book and marry in a later sequel. Impulsive and sometimes mischievous, Anne has many misadventures, such as accidentally dyeing her hair green. However, she matures in the course of the book, and, when Matthew dies, Anne foregoes college to care for Marilla, who is going blind. Showing no bitterness, Anne instead cheerfully welcomes her new situation, believing that it will hold great happiness. Anne of Green Gables was inspired by a newspaper story, and Montgomery infused the work with her own girlhood experiences and the rural life and traditions of Prince Edward Island. Although initially rejected by several publishers, the novel was a huge success upon publication. Mark Twain called Anne "the most lovable child in fiction" since Lewis Carroll's Alice. Anne of Green Gables was adapted for film, stage, and television. Although Montgomery was not interested in continuing the story, she wrote several sequels that traced Anne's life from girlhood to motherhood. However, they were less popular than the original novel.

This feature require that you enable JavaScript in your browser.
END_OF_DOCUMENT_TOKEN_TO_BE_REPLACED