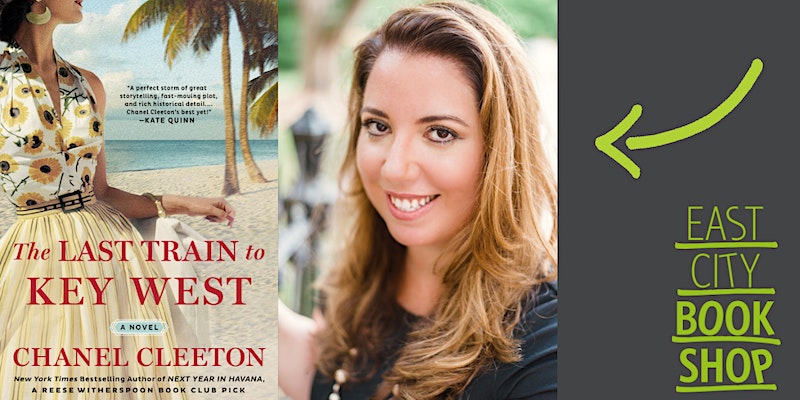 Tickets are available via Eventbrite here. Registration is required.

About The Last Train to Key West

In 1935 three women are forever changed when one of the most powerful hurricanes in history barrels toward the Florida Keys in New York Times bestselling author Chanel Cleeton's captivating new novel.

Everyone journeys to Key West searching for something. For the tourists traveling on Henry Flagler's legendary Overseas Railroad, Labor Day weekend is an opportunity to forget the economic depression gripping the nation. But one person's paradise can be another's prison, and Key West-native Helen Berner yearns to escape.

The Cuban Revolution of 1933 left Mirta Perez's family in a precarious position. After an arranged wedding in Havana, Mirta arrives in the Keys on her honeymoon. While she can't deny the growing attraction to the stranger she's married, her new husband's illicit business interests may threaten not only her relationship, but her life.

Elizabeth Preston's trip from New York to Key West is a chance to save her once-wealthy family from their troubles as a result of the Wall Street crash. Her quest takes her to the camps occupied by veterans of the Great War and pairs her with an unlikely ally on a treacherous hunt of his own.

Over the course of the holiday weekend, the women's paths cross unexpectedly, and the danger swirling around them is matched only by the terrifying force of the deadly storm threatening the Keys.

Originally from Florida, Chanel Cleeton grew up on stories of her family's exodus from Cuba following the events of the Cuban Revolution. Her passion for politics and history continued during her years spent studying in England, where she earned a bachelor's degree in International Relations from Richmond, The American International University in London, and a master's degree in Global Politics from the London School of Economics and Political Science. Chanel also received her Juris Doctor from the University of South Carolina School of Law.

**This is a virtual event that will be hosted on Zoom - you will need access to a computer or other device that is capable of accessing and sufficient Internet access. If you have not used Zoom before, you may consider referencing Getting Started with Zoom.**

When We Left Cuba (Paperback)

Next Year in Havana (Paperback)

This feature require that you enable JavaScript in your browser.
END_OF_DOCUMENT_TOKEN_TO_BE_REPLACED